Lying for Jesus, anyone?

Here‘s a roundup of two studies about Internet trolling, courtesy of Live Science: 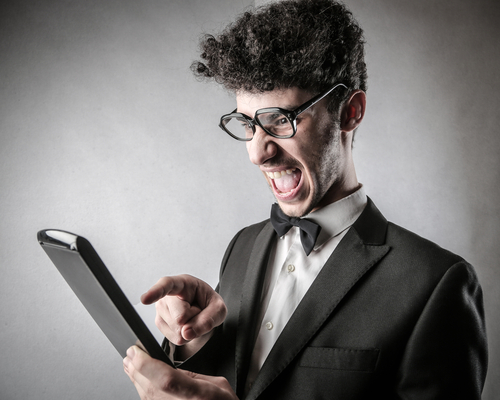 “Trolls” — people who intentionally incite discord in online communities — may have a lot in common with real-life sadists, new research suggests. In two studies conducted online, researchers examined personality traits and the online commenting styles of 1,215 people. The investigators found that Internet trolls tended to have personality traits related to sadism, psychopathy and Machiavellianism — a term used by psychologists to describe a person’s tendency to deceive and manipulate others for personal gain. The link between trolling and sadism was the strongest out of all three traits, the researchers said.

So what could explain the links between trolling and sadism? Simply put, some people seem to enjoy being argumentative and purposefully disruptive, according to the researchers. “Both trolls and sadists feel sadistic glee at the distress of others,” the researchers, from the University of Manitoba in Canada, wrote in the study. “Sadists just want to have fun … and the Internet is their playground.”

There are no apparent data that show that the ultra-religious do more trolling than the moderately religious, or vice versa — or that the non-religious like trolling better than believers. Neither atheism nor theism/deism are mentioned at all in the piece, because religious feeling, or the absence of it, wasn’t a focus of the studies.

But here‘s how the Freedom From Atheism Foundation spun the Live Science article. 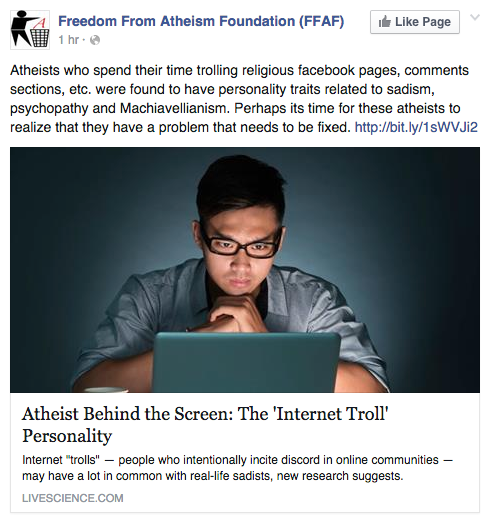 Atheists who spend their time trolling religious facebook pages, comments sections, etc. were found to have personality traits related to sadism, psychopathy and Machiavellianism. Perhaps its time for these atheists to realize that they have a problem that needs to be fixed.

Note that the FFAF even changed the headline (“Atheist Behind the Screen: the ‘Internet Troll’ Personality”) — maliciously replacing the word ‘Sadist’ with ‘Atheist’ and passing that new title off as the Live Science original.

If that isn’t trolling (and bearing false witness to boot), I don’t know what is.

P.S. A little potpourri of the responses: